Adaptations for a Blind Pilot

Adaptations for a Blind Pilot

How can someone fly a plane without vision? 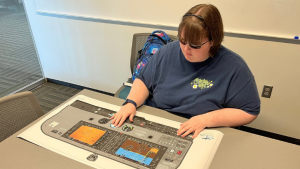 Is it possible for a person without vision to fly a plane? While most pilots rely on sight, it is possible for a blind pilot to rely on sound, touch and other adaptations instead.

Adaptations allow the blind or visually impaired to live independent lives. Kaiya Armstrong, a blind 21-year-old, only learned about the possibility of adapting necessary tools like kitchen appliances or a smartphone six years after losing her vision through Foundation for Blind Children’s Adult Comprehensive Program. “It’s new to me but I love them”, says Kaiya.

Now, Kaiya is not just adapting daily living tasks. She’s also adapting a plane to fly from Phoenix, Ariz. to Washington D.C. Below are some of the tools making this possible. 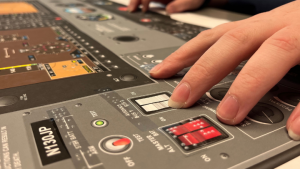 Most students learning to fly a plane utilize a map of the cockpit. This map allows students to study the layout of a plane’s various gauges and levels at home. In this adaptation, Foundation for Blind Children transcribed the map in braille. Now, Kaiya can memorize the layout of the cockpit outside of scheduled training sessions like her sighted peers.

Solve this problem. Kaiya is flying a small aircraft. If she turns 3 degrees per second, how many seconds would it take to turn 180 degrees? That real-world math problem is how Kaiya maintains direction when flying. She can’t see the compass and her sense of direction adjusts quickly. So, she times her turns. “I’ve been able to get it nearly spot on”, says Kaiya. 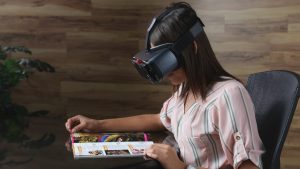 The Patriot Viewpoint is a wearable technology that magnifies near and far vision. The handsfree headset allows users with low vision to read, watch a live performance or execute daily living tasks. For Kaiya’s purposes the device allowed her to see the cockpit of the plane and better understand the layout. Even more exciting, the device made it possible for Kaiya see her mom’s face for the first time since losing her vision. “That was amazing, I haven’t been able to see her in a few years so that was just amazing”, says Kaiya.

Kaiya’s sense of touch and sound are key tools in operating the plane. Kaiya identifies levers and buttons in the cockpit by touch. The handles are textured differently which helps discern one similar handle from another. When taking off, the sound or pitch of the plane tells Kaiya how high or low the plane is flying.

“There’s Tyler”, says Kaiya. “That’s a big one”, she finishes her sentence. Tyler Sinclair, from Leopard Aviation, is Kaiya’s sighted guide. He fills in any gaps in Kaiya’s adaptations. Tyler will describe what is happening outside of the plane and give cues. Kaiya relies on Tyler most when taxing but once in the air Kaiya flies mostly independent of any assistance.