Daniel Nevarez says he would’ve given up without FBC 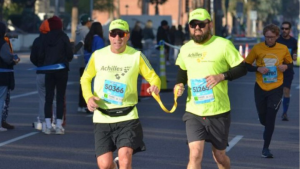 “I would’ve never imagined this in my wildest dreams”, says 41-year-old Daniel Nevarez about his newfound running career. The Phoenix resident is headed to New York in November to complete the New York City Marathon, the largest marathon in the world.

This opportunity means more to Daniel than most other participants. He’s been on a long challenging journey since 2011 when his vision began to deteriorate. “I was driving to work. I closed my left eye and my right eye turned green. I couldn’t see”, Daniel remembers.

Throughout the process of losing his vision, Daniel was determined to harness any remaining vision. He graduated from Foundation for Blind Children’s Adult Comprehensive Program through Vocational Rehabilitation from the State of Arizona where he excelled at braille among other accomplishments.

Still, his motivation was stunted when Daniel was deemed unable to work at his current job due to his disability. With the continuing loss of vision and this loss of his passion, Daniel’s mental health plummeted. “I was confused. I was so confused”, he says.

Until, Daniel found a new passion through his FBC instructors, West Lee and Ivan Santiago. They encouraged Daniel to run. Race after race alongside a sighted guide, Daniel’s confidence grew. Even more so when his peers encouraged him to enter the New York City Marathon. Daniel says, “It felt great. It felt like I was worth something again.”

Now, Daniel will be participating in the marathon and sharing his journey along the way.  “I didn’t understand what vision loss was before I lost my vision”, Daniel says.

While he didn’t intend to be an inspiration for others, Daniel takes on the responsibility with pride and credits Foundation for Blind Children in part for his success. He says, “I would’ve given up without FBC.”

Your support gives FBC’s clients and students hope to not give up and conquer their vision loss diagnosis. Thank you.