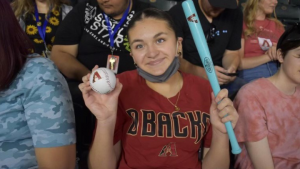 “I didn’t think too much about it”, says 17-year-old Irene describing her visual impairment. She was diagnosed with retinoblastoma at six months old. The diagnosis would result in the removal of Irene’s left eye and replacement with a prosthetic. “I thought I was like everyone else”, finishes Irene. And despite her visual impairment, the bubbly teen is like everyone else.

Irene grew up in Tucson, Ariz. loving her two dogs and sports. She found Foundation for Blind Children through Arizona’s Vocational Rehabilitation services. Upon her first visit, Irene thought FBC was “a really cool place”. She was more excited than nervous to join Teen-to-work. The six-week residential program hosted at Arizona State University prepares high schoolers to land their first job.

Irene, who is interested in becoming a teacher, was paired with FBC Teacher of the Visually Impaired Savannah Fabsitz. “I felt welcomed”, says Irene about joining the kiddo-filled classroom. She assisted with snack time, recess, and activity centers. “Irene’s confidence grew as she found her place. She came in with questions to better understand the students and always asked what she could do to help”, says Savannah. 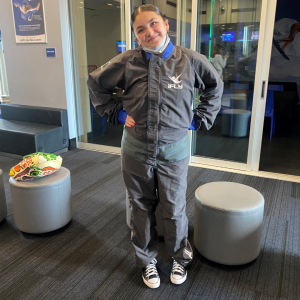 On top of completing internships and educational sessions, Teen-to-work participants also have fun with their peers. The group visited iFLY, an indoor skydiving center in Scottsdale, sporting events, and more. Irene, a sports fan, loved attending professional baseball and basketball games for the first time. “I don’t know anyone who is visually impaired. So, it was nice to spend time with people with similar or different visual impairments. It showed me that it [a visual impairment] doesn’t stop you from doing anything”, says Irene.

Irene heads into her junior year of high school in the fall. Your support gives visually impaired or blind young adults new opportunities and the confidence to pursue any aspirations. Thank you.